A Primer on Continuous Delivery

Continuous delivery is all about moving code to production as quickly as possible and with as much automation as possible. This reduces risk. If you’re able to automate everything from code check-in to production deployment, you’ve reached continuous deployment nirvana. That’s a stretch goal for most companies. 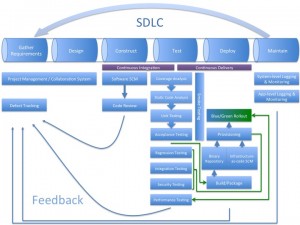 So you’re probably familiar with the IEEE SWEBOK’s definition of the software development lifecycle (SDLC). I’ve added a Deploy phase, as many people have, to illustrate what happens between Test and Maintain. Doing so better conforms to IEEE/EIA Standard 12207.0-1996. Some important takeaways:

One of the biggest benefits of moving to the cloud is the ability to deploy changes without negatively affecting users.

If your environment is large enough, you will likely use some combination of these deployment models. For example, daily minor builds may use in-place while larger monthly builds use rip and replace so that the OS may be patched.